It’s been a while, so I thought I’d share a little something I wrote a while back. Remember, when opportunity knocks you have the option to hide behind the sofa and pretend no one’s home.

William was sleeping when the angel came to him.

He had been dreaming of hard labour in the field, ploughing and sowing. It was a common dream of his, one he’d often pondered the meaning of. He thought it was probably something to do with rebirth, or renewal, or fertility. More likely it was just too much cheese before bed.

In this dream, as in every previous dream of its kind, his plough would strike something hard, twist and buck in his hand. The dream would usually end there, but not tonight. Tonight the plough wrested away from his grip and sped off, leaving a deep groove in the soil behind it, merrily ploughing the rest of the field on its own.

He looked down at the ground, searching for whatever it was his plough had struck. A sharp corner poked out of the dirt. He dug away at its edges with his fingers, freeing it from the earth. He pulled it out to examine it more closely.

It was a box, about the size of his head, made of granite and marble but lighter than it should be. He was suddenly overcome by a strange feeling he hadn’t had on previous nights – he knew that this was a dream. He could feel the soft earth beneath his feet, could feel the cold rough surface of the box, but something was off; he was certain that he was actually asleep and in his own bed in the farmhouse.

“How curious,” he said to himself.

He looked around. The field was just as he remembered it from his waking hours, as far as he could tell. He wondered what would happen if he attempted to take control of the dream, perhaps to take flight or to change his surroundings. He looked at the plough retreating into the distance and willed it to come back. It didn’t.

“Perhaps I need a bit more practice,” he thought. “Let’s start with something small. Like opening this box.”

He opened the box.

A burst of bright light spilled out, blinding him. A great booming voice rang out in such rumbling tones that he could feel the soles of his feet vibrating.

William dropped the box in shock.

He nudged it gently with one toe. What was it?

WILLIAM, the voice resumed. ARE YOU HARKING?

GOOD, YOU ARE HARKING. PICK THE BOX UP, AND GAZE INTO THE LIGHT.

William did as he was told, though his hands were shaking so much he thought he would drop the box again. The strange voice rattled his back teeth.

I AM THE ANGEL OF DIVINE INTERVENTION. I AM TASKED WITH INTERVENING, DIVINELY. DO YOU COMPREHEND?

“No,” William answered honestly. The voice sighed, blowing the farmer’s hair back.

THEN I SHALL ELABORATE. I AM TO SET YOU ON AN ADVENTURE TO SEEK A GREAT FORTUNE. THE JOURNEY WILL SEND YOU FAR FROM HENCE AT GREAT PERIL, BUT IT IS OF HUGE IMPORT.

“What will I be importing?”

WHAT? NO. NO, I MEAN IT WILL BE HUGELY IMPORTANT. BECAUSE YOU WILL BE RICH.

“Well why didn’t you say that, then?”

“Seems to me that sounding good isn’t quite as important as making sure you’re understood, don’t you think? Especially if you’re meant to be sending people on important quests.”

LOOK, DO YOU WANT TO GO OR DON’T YOU? BECAUSE WE DON’T HAVE ALL NI-

There was a moment of stunned silence.

I BEG YOUR PARDON?

“I said no, thank you. See, I’m asleep at the moment and I don’t really know how long I’m likely to be. I can’t go on a long quest and then have to oversleep in order to finish it. Who’ll feed the pigs?”

OH, AHAHAH, I CAN SEE THE CONFUSION. NO, SEE, THE QUEST IS FOR WHEN YOU ARE AWAKE.

WELL, SEE, I TELL YOU ABOUT THE TREASURE AND WHERE IT IS, AND YOU WAKE UP THINKING IT’S A DREAM ONLY I’VE LEFT A SHEAF OF WHEAT OR SOMETHING UNDER YOUR PILLOW AS A SIGN AND SO YOU GO OFF AND SEEK YOUR FORTUNE, GROWING AND MATURING ALONG THE WAY UNTIL YOU RECEIVE YOUR FINAL REWARD OF A KINGDOM AND A BEAUTIFUL WIFE AND SO ON.

There was no reply; the voice seemed to be pondering this. William felt more was needed.

“Like I said, who’d feed the pigs? And the cows would need milking, and if I don’t get the field ploughed in time for sowing then I’ll be buggered. I can’t just up sticks and travel off to foreign lands seeking my fortune and battling monsters and outsmarting evil viziers. It wouldn’t be fair on the livestock, or the people who’re counting on my crops. So thank you, but if it’s all the same to you, I’ll have to decline.”

He laid the box gently on the ground.

“No, I don’t think so,” William replied firmly, slapping the lid shut. The voice continued, muffled and confused.

wait, what are you doing? william?

William placed the box back into the hole and started to shovel dirt back over it.

are you serious? this is ridiculous … stop, william. william.

William didn’t stop. He filled the hole and smoothed the dirt over until the spot was indistinguishable from the rest of the field. He patted his hands clean on his trousers.

And with that, William flew off into the clouds.

The next morning there was a long white feather under his pillow. He threw it away. 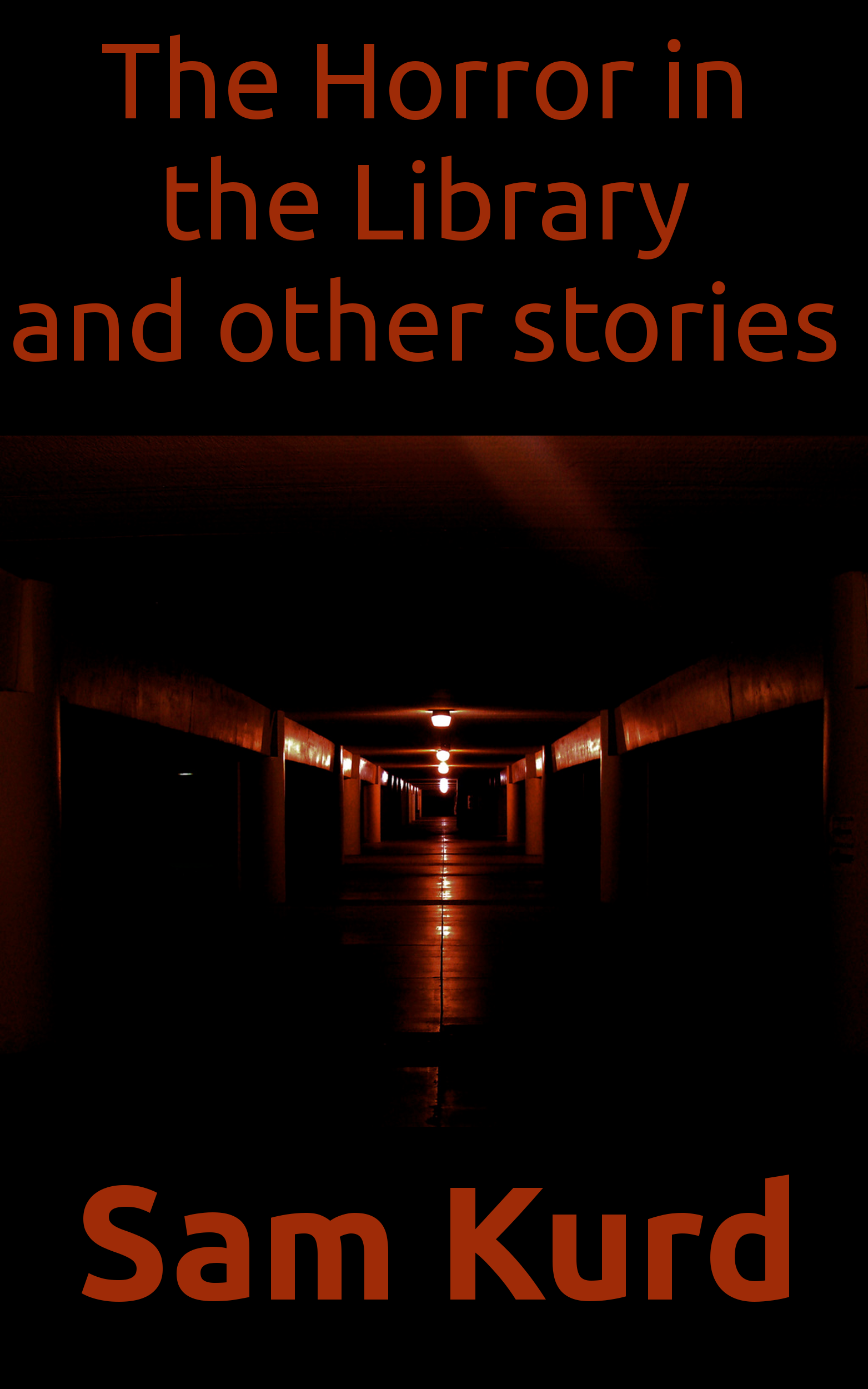 It’s called The Horror in the Library and Other Stories, and it can be found over on Smashwords where it will cost you the princely sum of zero of your English pounds. That’s right, it’s completely free!

How can you read it if you don’t have a smartphone, a Kindle or other such device! I’m glad you asked! My recommendation is to download a program like Calibre – it’s free and will let you read ebooks of all different types and formats (which means you can take advantage of the Humble Bundle book bundles more often!). I’m reliably informed that there are browser extensions that will let you read ebooks in your browser, but to be honest I’m not sure how much I trust them, so downloader beware.

I’d like to ask you all a quick favour – even if you don’t want to read the stories (which is fair enough), could you please spare a moment to spread the link to the book around a little? That way it might get in the eyes of people I don’t know, which is an absolute win as far as I’m concerned.

If you do read the stories, be sure to tell me what you think in the comments!